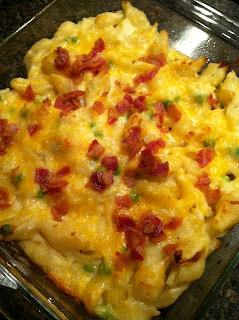 Some days you just don’t want to leave the house. You know exactly what I mean. You putter around, watch TV, go online, read a book, find things to do here and there, and before you know it, it’s dinnertime. I’ve been having a lot of those days lately. I attribute it to the fact that I not only love my home (I’m still in the “honeymoon” phase as a first-time homeowner), but I also love any excuse to stay in and make food that’s fresh, fast, easy and, of course, super tasty. I spend a lot of time in my kitchen. A lot.

A few weeks ago, I became obsessed with the idea of making Mac-n-Cheese from scratch. Odd because I wouldn’t normally classify myself as a Mac-n-Cheese-girl. (It’s more my sister Laura’s thing). And, I never enjoyed the stuff from the box with the orange powder pouch. But, there I was, frantically searching my Food Network and Pinterest apps for a cheesy and crusty Mac-n Cheese recipe.

After narrowing it down to a few contenders, I got to thinking about the elements I liked and what I would add, remove or substitute, you know, to do my own thing. (I do that a lot a lot). Gooey doesn’t cut it for me. I need those browned, caramel bits on top or it’s curtains. What I ended up with is the masterpiece you see here. (Yup, I’m totally modest too).

If the pictures aren’t enticing enough, I’ll break it down a little further: The pancetta adds a savory, salty element along with the desired crunchiness, and by using the pancetta grease, you don’t need to add butter to make the roux. The pasta shells combine perfectly with a low-fat cheese sauce. Yes, you read that right: low-fat. I am probably most excited to report that I used skim milk, non-fat Greek yogurt and reduced fat cheeses in this recipe, and it still tastes flipping fantastic! The peas? I added them not only for a little sweetness to balance all of the savory I have going on here, but also because I felt an obligation to include *something* green. The other great part of this dish? I had all of the ingredients on hand (a total timesaver).

If you have Mac-n-Cheese lovers in your house, you should definitely try this one. It’s a great way to get the kids to eat their vegetables!

1. Preheat oven to 400 degrees. In a saucepan, cook pancetta until golden brown and crispy. In the meantime, cook pasta shells according to package directions and drain, but do not rinse. Combine cheddar and monterey jack cheeses in a bowl.

2. Remove pancetta from pan, taking care to reserve grease. Add flour to grease over medium heat, stirring constantly, to create a roux. Once the mixture starts to brown, add the milk. Let the mixture come to a simmer and add 1 1/2 cups of the cheese mixture and the container of yogurt. Stir until well combined.

5 Responses to “Comforts of Home: Mac-n-Cheese with Pancetta and Peas”